Apple today updated its investor relations page to note it will announce its earnings for the second fiscal quarter (first calendar quarter) of 2016 on Monday, April 25.

The earnings release will provide a look at sales of the iPhone 6s and 6s Plus following Apple’s record first quarter, which saw the company announce 74.8 million iPhone sales and $18.4 billion profit on $75.9 billion in revenue. Apple has warned that iPhone sales will decline in the March quarter, potentially leading to Apple’s first year-over-year decline since the iPhone was released in 2007. 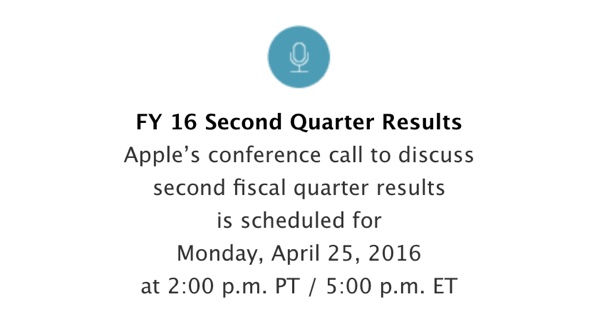 During its first quarter earnings report, Apple provided Q2 2016 guidance of $50 to $53 billion in revenue and gross margin between 39 and 39.5 percent. Should Apple only take in $50 to $53 billion, the company will also see its first year-over-year revenue drop in 13 years.