After discovering that a handful of iPhone SE components are interchangeable with those of the iPhone 5 in a teardown last week, iFixit today shifted its sights to the other major release from Apple’s “Let Us Loop You In” media event – the 9.7-inch iPad Pro.

iFixit surmised that the new iPad Pro is essentially the offspring of the iPad Air 2 and 12.9-inch iPad Pro, acquiring the looks of the former and specs of the latter. The site found, however, that the 9.7-inch iPad Pro acquired the “ugly genes” of the family when it comes to its internals as Apple continues to cram ever more features into its devices at the cost of repair accessibility. 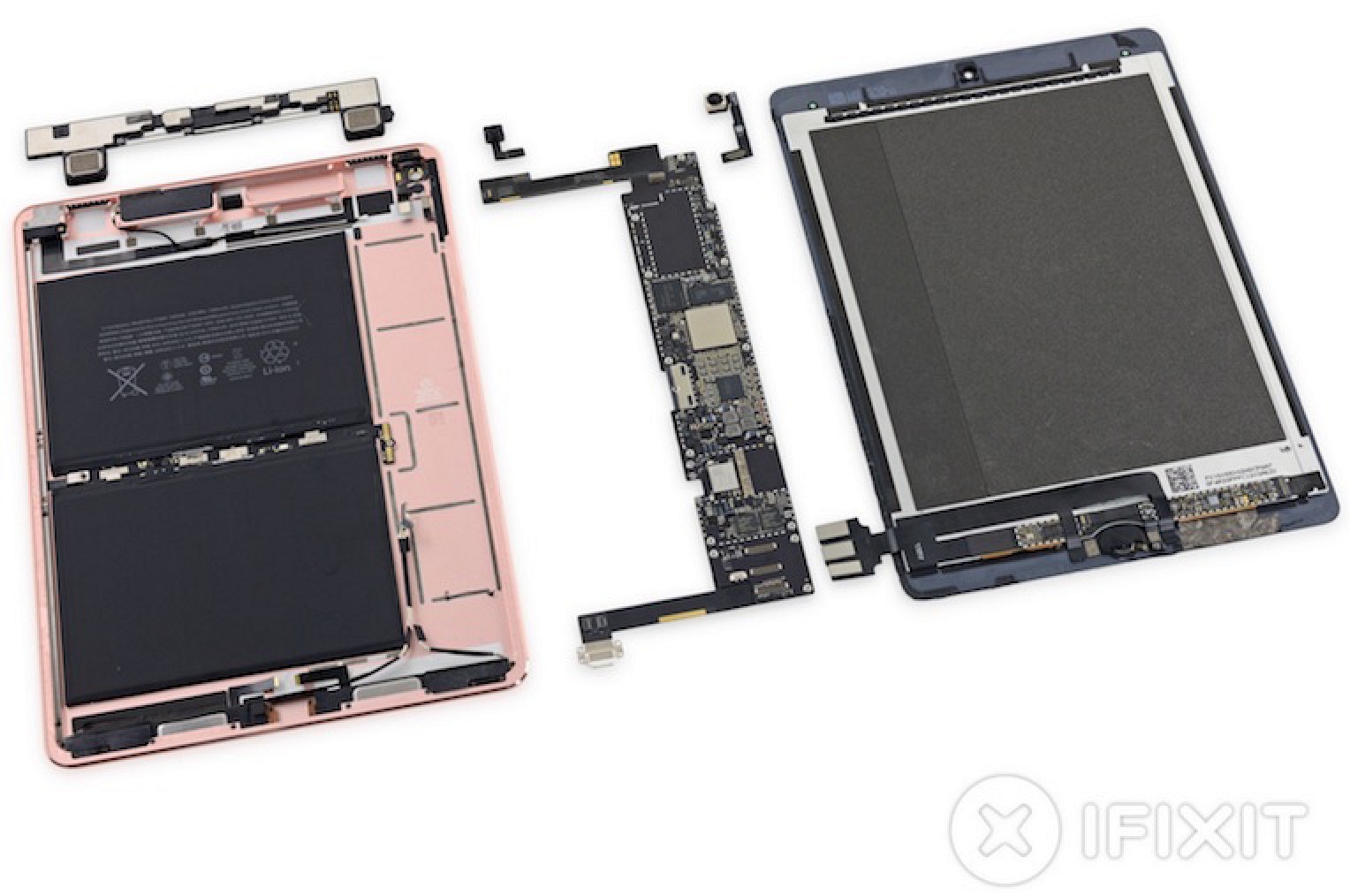 After disassembling the EMI shield covering the logic board, removing the battery, and moving onto the upper speakers, which connect to the logic board with spring contacts, iFixit discovered that most of the 9.7-inch iPad Pro’s components are held together by “gobs of adhesive” that will make it difficult for everyday repairs.

The site also examined the protruding camera, which it notes is the same 12 MP camera found in the iPhone 6s Plus and an upgrade from the 12.9-inch version’s 8 MP rear-facing camera. iFixit suggests the iPad Pro’s camera is optically stabilized like the one in the iPhone 6s Plus, but Apple has not marketed the iPad Pro with support for optical image stabilization. Regardless, the beefed-up specs of the 9.7-inch iPad Pro’s camera require the bump on the rear housing, which is not present on the 12.9-inch device. 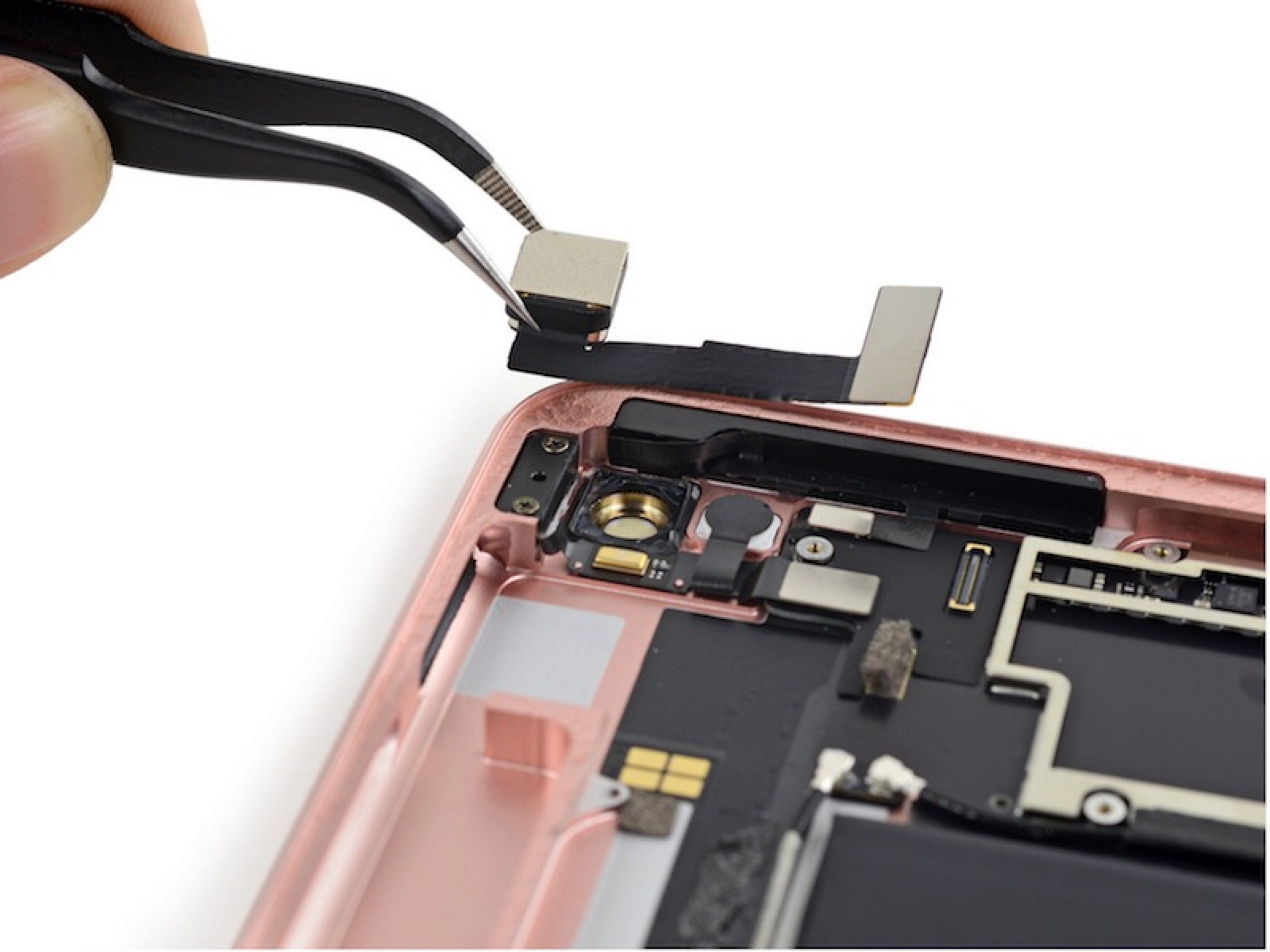 One of the wild cards of the teardown centered around a group of antenna interconnect boards, which iFixit determined to “serve no actual purpose.” Upon closer inspection, the site hypothesized that the sturdy, flat tops of the boards perhaps provide extra support for the iPad’s display, which could come in handy since users with Apple Pencils are bound to rest their palms on the display repeatedly.

After inspecting a similar A9X 64-bit processor, iFixit compared the battery capacities of the recent line of iPads to the new iPad Pro. The 9.7-inch iPad Pro’s 7,306 mAh is expectedly less than the 12.9-inch iPad Pro’s score of 10,307 mAh, but largely in line with the 7,340 mAh of the iPad Air 2. Despite their varying capacities, iFixit noted that all three of the iPads have “roughly the same estimated battery life” of about 10 hours.

iFixit gave the 9.7-inch iPad Pro a repairability score of 2 out of 10, with a 10 being the easiest to repair. The disassemblers noted that with the removal of the pull tabs found under the battery in the 12.9-inch iPad Pro, a “virtually impossible to replace” Smart Connector, the fused-together LCD and front panel glass, and a more-than-average amount of adhesive holding everything together, the smaller iPad Pro is even more difficult to repair than its larger counterpart, which scored a 3 out of 10 in the same test.