First look: Logi Base is the first device to charge your iPad Pro via Smart Connector

Apple's magnetic Smart Connector is no longer just for keyboard accessories. The new Logi Base Charging Stand with Smart Connector uses the input capabilities of the new port to recharge both the 9.7-inch and 12.9-inch iPad Pro models.

The Logi Base is now available from Logitech for $99.99 and ships this month. Logitech providedAppleInsider with a sample unit ahead of Tuesday's announcement.

The aluminum Base is heavy and sturdy, with a rubber anti-slip pad that satisfyingly holds the accessory in place on a flat surface. This allows you to quickly place or remove the iPad Pro while the Logi Base stays in place.The use of magnets in the Smart Connector also make it easy to correctly line up the iPad Pro. Simply place it on the dock in the appropriate fashion and the connectors will snap into place accordingly.
On the back, a female Lightning port allows a user to bring their own Lightning cable and power brick. Simply plug into the back of the Base and dock your iPad, and you're good to go.

The Apple-certified accessory is the first to recharge the iPad Pro via the Smart Connector. Previously, it was only used for keyboard attachments, including Logitech's own Create keyboard. 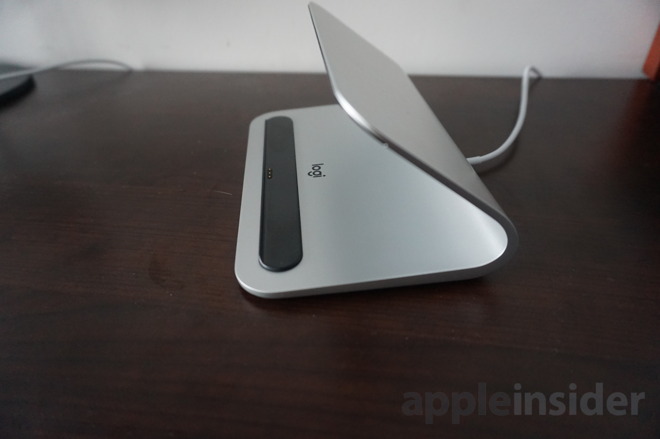 The Base also continues the close partnership between Logitech and Apple. Last year, the two companies worked together in secret on the Create keyboard, allowing it to ship alongside the 12.9-inch iPad Pro.