With WWDC (and, presumably, iOS 10’s debut) weeks away, Apple has revealed that 84 percent of possible users are now upgraded to iOS 9, currently the latest version of its mobile OS.

For those keeping track at home, not only is that an extra 4 percent increase from the numbers announced at Apple’s iPhone SE launch event in March, but it also puts Android’s fragmented adoption figures to shame. 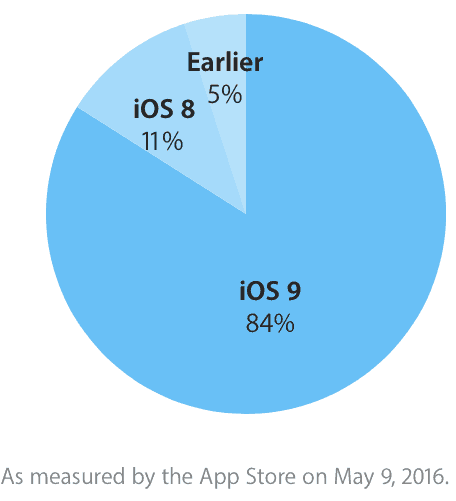 By comparison, Android Marshmallow — which was first debuted at Google I/O in May 2015 and officially launched in October — hasadoption rates of just 7.5 percent. The majority of Android users (35.6 percent) are still running some version of Lollipop, which launched in 2014, or KitKat (32.5 percent), which was released in 2013.

iOS 9 won’t be officially superseded until September, although after WWDC devs will likely be turning their attentions to the big tenth refresh of iOS.

However, Apple continues to release new updates for iOS 9. Earlier this month, it dropped a beta version of iOS 9.3.2 for registered developers and public testers — bringing a fix for a Game Center bug, and the ability to use Night Shift in Low Power Mode.

What updates are you hoping for from iOS 10? And what do you think the final numbers are likely to be for iOS 9 adoption? Leave your comments below.