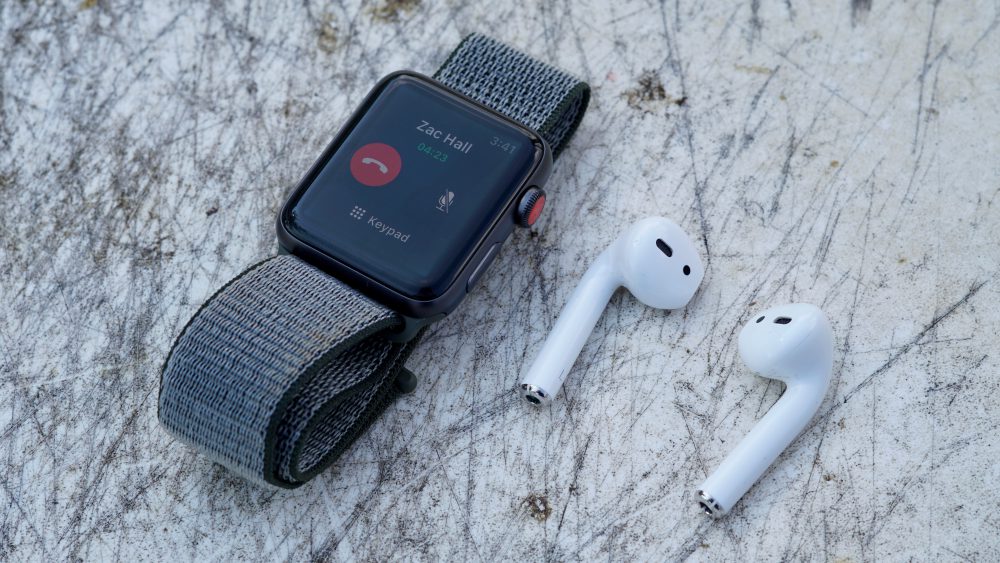 When the first generation Apple Watch debuted in 2015, people often called it the Dick Tracy watch because you could make phone calls from your wrist like the comic book strip detective known for his 2-way wrist radio. Apple Watch wasn’t fully there yet, however, because it needed a nearby iPhone to actually carry those phone calls. Answering the phone on your watch could be convenient, but it was mostly just a neat demo since you had to carry the iPhone anyway.

Fast forward to today and Apple Watch Series 3 finally lets you make phone calls without carrying your iPhone thanks to optional LTE, but calling is only a part of what cellular enables for the watch. Apple Watch Series 3 can be your dedicated tour guide on your wrist with Maps, your connection to friends and family with Messages, and your always-present personal assistant with Siri — and now even when you’re away from your iPhone.

Apple Watch Series 3 comes in two flavors: GPS from $329 and GPS + Cellular from $399. You can buy the model with LTE and only activate service on a month-to-month basis so I highly recommend considering that model if you’re on the fence.

Both models have the new S3 dual-core processor which Apple says makes Series 3 up to 70% faster than Series 2. What that looks like in practice for me is over a minute faster boot up time (1 minute 20 seconds versus 2 minutes 26 seconds), the ability to reliably use the Home app to control HomeKit accessories, and seeing text transcripts when using Siri and dictation in real time. Those improvements paired with the general zippiness of the system makes my Apple Watch Series 2 feel laggy in comparison and the first generation Apple Watch feel down right broken.

Siri also doesn’t provide audio feedback on Apple Watch without using the VoiceOver accessibility feature; this would be fine as a setting, but I would prefer the option to have a more engaging Siri experience on Apple Watch. Maybe not always, but sometimes.
It turns out it was a performance restraint and not a design decision, and the Apple Watch Series 3 remedies that. Seeing your words appear as text as you speak and trusting Siri to quickly respond when you glance away dramatically improves the reliability of the experience.

I found myself giving Siri commands with more confidence and less awkwardness and frustration thanks to the new found responsiveness. (I only saw one ‘I’ll tap you when I’m ready’ message from Siri on Apple Watch Series 3, and it processed in a split second.)

Siri’s new voice comes with three preferences in the Settings app on Apple Watch: Always On, Control With Silent Mode, and Headphone Only. You can also switch between female and male Siri on Apple Watch by changing the voice preference in Settings on the iPhone.

Apple Watch Series 3 also includes Apple’s new W2 wireless chip for up to 85% faster Wi-Fi performance without taking a toll on battery life. In terms of performance and experience, my one complaint in testing over the last few days was being locked into the Phone app during a call. This means you can’t reference a message in Mail or a location in Maps when you’re on a call over cellular which I imagine is a processing limitation.

You can also capture the number of flights climbed and track workouts with incline more accurately thanks to the barometric altimeter in Apple Watch Series 3. Apple says developers will be able to create apps that take advantage of this additional sensor for tracking a variety of outdoor workouts.

iPhone 6 and 6 Plus first introduced the barometer on the iPhone so it’s nice to see the new barometric altimeter on Apple Watch Series 3. As a frequent bridge runner, for me this means I can see elevation gain at the end of a steep run using Apple Watch Series 3 without bringing my iPhone.Of course cellular connectivity is the big story with Apple Watch Series 3. You still need an iPhone and Apple Watch needs to be on the same service plan, but both the watch and phone use the same phone number and switching between modes is seamless. (You do have to use the same carrier on the Apple Watch as the iPhone, however, which can be limiting outside of the US.)

Control Center now features a new cellular toggle for enabling or disabling the LTE radio which is only used when you’re away from both Wi-Fi and your iPhone. In testing, there’s a brief period of transition between being connected to the iPhone’s network and switching to the Apple Watch’s service which results in a few seconds of seeing a disconnected status. In practice, you likely won’t notice this unless you try to switch networks during a call which results in a dropped call.

If you use Find My Friends to share location from your iPhone, Apple Watch Series 3 can even automatically switch to using your Apple Watch’s location when you leave your iPhone which is really clever and useful.

For voice calls specifically, Apple Watch Series 3 is highly impressive. The built-in speaker (which has a slightly repositioned and larger opening) is plenty loud for moderate noise levels, and the person on the other line would never guess you’re calling from your watch. Ambient noise is one thing to consider, however, as the Apple Watch doesn’t cancel background noise as well as the iPhone.

Quick calls from the wrist are very convenient, but pairing a set of Bluetooth earphones like AirPods will offer the best experience for phone calls longer than a few minutes. Apple only promises 1 hour of talk time over LTE, however, although battery life was no issue for me during mixed usage testing with short calls, workouts, and general use.

For me, cellular service on Apple Watch is primarily for being a phone call away from family and friends in the event of an emergency. Apple Watch Series 2 pushed me to start outdoor running after testing its built-in GPS, but running without the iPhone means going off the grid.

Just before my son was born a few weeks ago, there was an evening where I asked my wife if it was safe to run a few miles or if she thought she might go into labor in the next half hour. She assured me it was alright (and it was!) but it was still a concern that Apple Watch Series 3 resolves.

Apple Music streaming (which is the other major appeal for me) is coming but won’t be available until next month so nothing to report on that experience yet. (Also fingers crossed for an Apple Podcasts app with streaming in the future.)

Having cellular on my Apple Watch for the last few days has started to slowly break my iPhone addiction in a good way. This is something people suspected the original Apple Watch would do, but the lack of cellular connectivity before now limited that effect.

Taking my daughter to the park over the weekend and being able to leave my iPhone in the car without going off the grid was a really great experience. No temptation to check Twitter or work email out of habit, just quality time in the moment. Leaving behind your iPhone means leaving behind your camera these days, but for me this has given me more reason to use my mirrorless camera.

Part of that restraint will fade away in time as Apple Watch apps update to fully support LTE. Right now cellular functionality is limited to Siri and Apple’s built-in apps. Third-party apps like Tweetbot and Airmail haven’t been updated to work over the cellular network while older apps like Twitter and Instagram still rely on the iPhone to even launch. My hope is that developers see Apple Watch Series 3 as an opportunity to revisit their apps when adding cellular support, but for now the cellular experience is limited to Apple’s apps.

For its part, Apple still has work to do on the software side for a few apps as well. Apple Music is gaining streaming to Apple Watch over LTE alongside a new Radio app, but these updates won’t be available until sometime in October.

Podcast playback is also a major opportunity for Apple Watch, and streaming could potentially help solve the problem. Apple hasn’t created an Apple Watch version of its Podcasts app and the popular Overcast client recently had to pull support for offline syncing due to a change in watchOS 4. There’s just no good podcast solution for Apple Watch yet and LTE sets the stage for streaming. Fingers crossed we see this added in a future update.

A few more Apple Watch Series 3 LTE tidbits: the LTE model has 16GB total storage versus 8GB on the GPS-only model. After watchOS counts the system, my review Apple Watch Series 3 showed a capacity of 13.0 GB compared to my personal Series 2 which shows 5.6 GB with both watches running watchOS 4.

Why the extra space on the LTE model? The thinking here is that as the Apple Watch gains more apps that work away from the iPhone, the extra storage will already be there to support them. Future proofing. You can also sync up to 8GB of local music now compared to just 2GB before.

There’s also the red dot on the Digital Crown. Apple Watch Series 3 cleverly uses the display as the cellular antenna so why does it have that red dot? It’s strictly a visual indicator to signal LTE models over others. I enjoy the status symbol and think it works well with the Explorer face and many bands, but I’m already seeing it become an issue for some potential buyers concerned with the look. I suspect we’ll see something more neutral next time around. 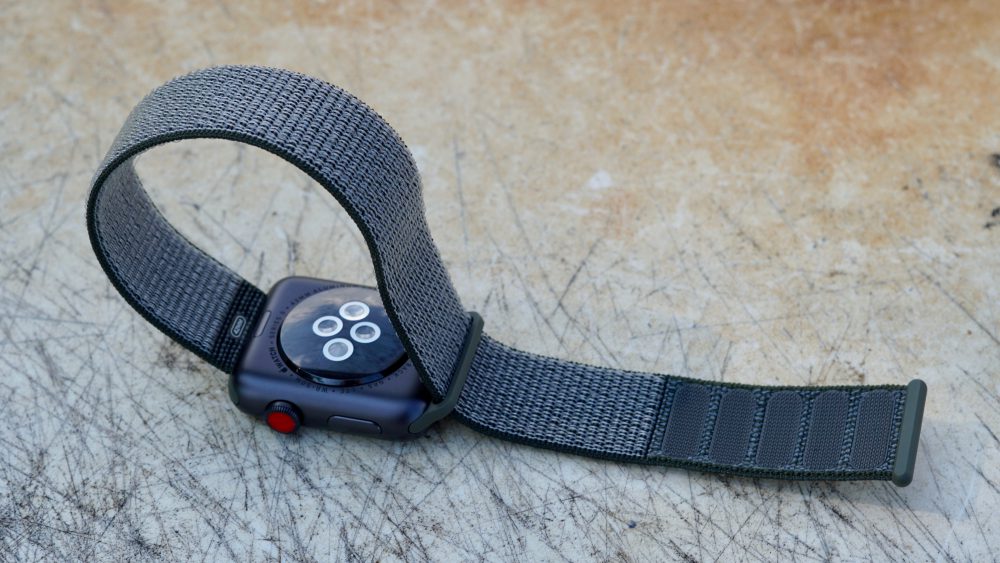 Apple also introduced a new Sport Loop band that uses a Velcro-style hook-and-loop fastener to close. I’m partial to Link Bracelet and Nike Sport bands personally, but Sport Loop is a very Apple take on a strap like this.

Sport Loop is very cushiony and actually stretches back and forth when you pull it. The material also repels water almost instantly unlike the similar looking Woven Nylon strap that takes some time to dry.

Fully unlocking the potential of the new watch hardware will require more from third-party apps than we’ve seen recently, but I believe Apple Watch Series 3 has hit a sweet spot in price and performance to potentially drive enough interest to kickstart the platform.Apple Watch Series 3 feels like a major leap forward from the original Apple Watch, and both cellular and the dramatically improved Siri experience enables new uses over Series 2. Apple Watch has shifted from its experimental infancy to securing its place as an extremely motivating fitness coachand a practical escape from always being plugged in.