Three more reports of swollen iPhone 8 Plus batteries have surfaced in international markets, but the current rate of failure is still well within industry norms for infant failure of lithium ion batteries. 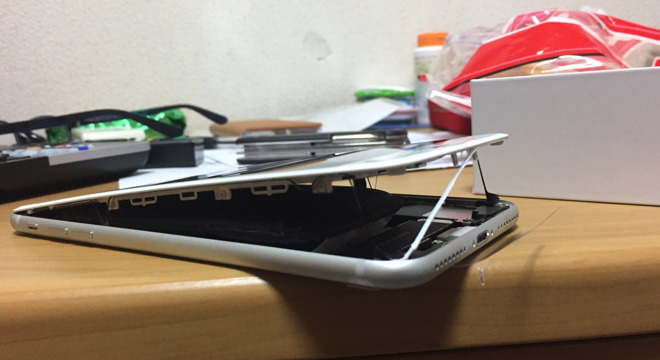 Three of the social media reports and two from MacRumors readers depict a swollen battery displacing an iPhone 8 Plus screen out of its housing. Four claim that the devices in question were being charged with an official cable and power adapter, with one earlier claim that it was received with a swollen battery.

Prior to AppleInsider's Saturday's report about the first two accounts of swollen batteries, a source within Apple not authorized to speak on behalf of the company informed us that Apple investigates swollen batteries even on older phones brought into Apple retail stores as a matter of course.

At present, the failures appear to be "infant failures" —meaning failures within the first 30 days of production of the device. AppleInsider has learned that another possibility is mishandling of the device in shipping —but there are no solid numbers failure rates from that, or any good way to glean that data outside of Apple diagnostics.

The normal infant failure rate of lithium ion batteries is about one in one million, so the existing failures are still well within statistical probability, assuming all of the accounts are accurate regarding charging equipment and the devices were not mishandled somewhere in the shipping process.

A more in-depth poll of ten Apple Genius Bars that we have worked with in the past still show zero iPhone 8 or iPhone 8 Plus models brought in for service with a swollen battery such as that displayed in the pair of reports.

Reading data gleaned as part of a different report from about this time last year, the same stores had four iPhone 7 and iPhone 7 Plus models come in for service with swollen batteries after the launch of the device, with the number tapering to two between all the stores in late October and early November. All but one of the iPhone 7 and iPhone 7 Plus models that came in for service at our polled Apple Stores were ultimately attributed to either user mishandling or abuse during the shipping process.

There are no reports of fire or property damage beyond the iPhone as a result of the swollen batteries at this time.

Several factors can cause a battery failure over time. In many cases later in a iPhone's life, an off-brand charger or cable can contribute to battery failure, as can mishandling by the user. There are no good numbers on lithium ion battery failure rates as a function of use, but calendar age and use pattern are also factors.

Apple has confirmed that it is looking into the situations surrounding each failure, but has so far declined to provide any more information.

The reported failure rate on the Galaxy Note 7 exceeded 1 in 20,000 with many of the failures causing explosive off-gassing of battery electrolyte. The root cause of the bursting phones was linked to bothbattery production problems and a design problem with the phone.