Following the release of the new 2018 MacBook Pro models, iFixit last week tore apart the 13-inch version and discovered the presence of a new silicone membrane underneath the keyboard's butterfly keys that Apple internal documents have since confirmed has been added to prevent dust and other small particulates from causing key failures.

To give us a better look at the new third-generation butterfly keyboard included in the new 2018 machines and how it works, iFixit has done a much deeper dive, exposing the keyboard to debris to test it out. 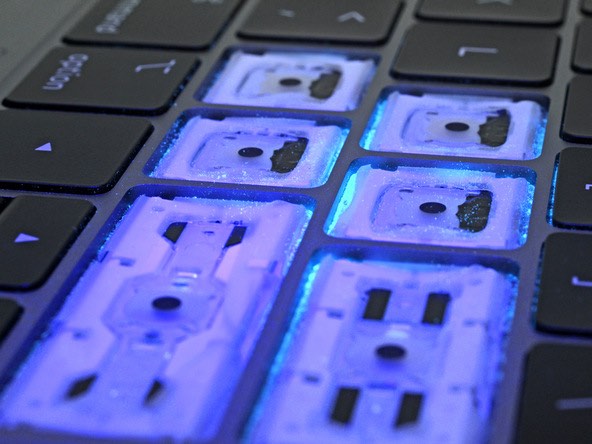 iFixit exposed the keyboard to a powdered paint additive that glows, allowing the site to track where and how dust accumulates. On the 2018 MacBook Pro keyboard, the dust settled at the edges of the membrane, leaving the butterfly mechanism of the keys protected. The same test was performed on the 2017 MacBook Pro keyboard, demonstrating less protection.

Lo and behold, the dust is safely sequestered at the edges of the membrane, leaving the mechanism fairly sheltered. The holes in the membrane allow the keycap clips to pass through, but are covered by the cap itself, blocking dust ingress. The previous-gen butterfly keys are far less protected, and are almost immediately flooded with our glowing granules.

With a combination of a lot of dust and aggressive typing, the dust did penetrate the membrane-covered key clips, hitting the top of the switch, suggesting that there's still a small potential for failure. iFixit was indeed able to cause the keyboard to fail by adding "a few poorly placed particles" of sand.

While the silicone membrane does not appear to be impenetrable, and there's no way to tell how the barrier will hold up over time as iFixit points out, it's still more protection than offered in earlier versions of the butterfly keyboard.

Following the dust test, iFixit did a more extensive teardown of the new keyboard, tearing it apart layer by layer. After a grueling experience pulling it apart, which explains why Apple has to replace the entire top case when installing a new keyboard, iFixit found that the silicone barrier is a single die-cut and molded sheet. 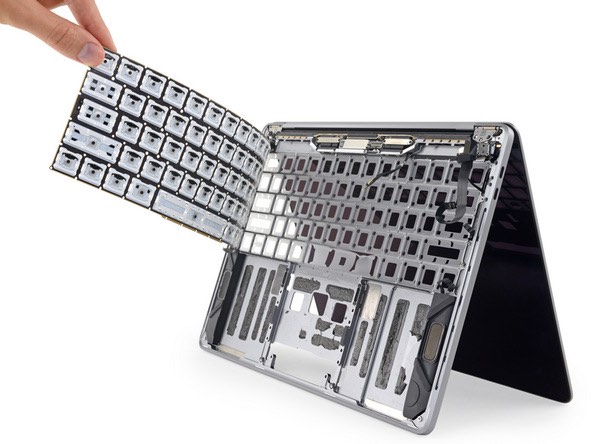 The keycaps on the keyboard have also been slightly redesigned, measuring in at 1.25mm thickness compared to 1.5mm thickness in the 2017 MacBook Pro, which iFixit suggests is to give the keys room to travel with the addition of the membrane.

The spacebar has been redesigned, with a keycap that easily separates from the butterfly mechanism, a departure from earlier models where the spacebar was more difficult to remove. All of the keys, spacebar included, were easier to remove and harder to ruin, in iFixit's testing.

Apple has not publicly confirmed that the new third-generation butterfly keyboard was introduced to enhance reliability and to cut down on the the key failures that were seen in 2016 and 2017 machines, though the company has informed Apple Authorized Service Providers that this is the case.

Instead, in its 2018 MacBook Pro marketing materials, Apple claims the new silicone barrier was added to introduce a quieter typing experience, an issue that few people seem to have had with the original keyboards.